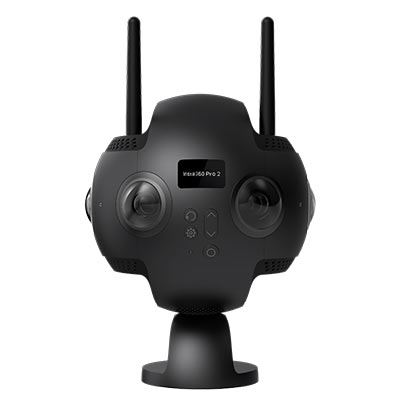 Price Promise
Ask us how we can offer you more value for your money.We’re always looking for the best price, even if we’re saving a couple of pounds. That’s why we’ll make it our best interest to offer you the very best option should you find them cheaper.Our Price Match Promise How you can request a price match.
Delivering/collecting your order

Every Detail. From Every Angle

The Insta360 Pro 2 uses six cameras to capture every angle of a scene at once. The resulting videos or photos are then fused into two 8K 360 images, one per eye, to create immersive, beautifully detailed 3D VR. Available shooting modes include 8K 3D at 30 FPS, 8K monoscopic at 60 FPS, 6K 3D at 60 FPS, and 4K 3D at 120 FPS, among others. New in-camera HDR keeps lighting natural even when it varies in every direction, and i-Log mode is optimised for maximum flexibility in post-production colouring.

The Pro 2 features Insta360’s proprietary FlowState stabilization, bringing a high-quality in-camera stabilization system to professional VR for the first time ever. Until now, VR creators have faced a grim choice: Make their audience sick with poorly stabilized footage, or use bulky stabilizing gear that would show up in scene and create a post-production headache. FlowState solves this, achieving gimbal-level, pro-quality stabilization with no gear necessary. The Pro 2 uses an ultra-precise gyroscope that tracks motion on nine axes, and then – when paired with Insta360’s software innovations – allows creators to stabilize their footage down to a hair, fully automatically. The dynamic, moving shots that filmmakers rely on to tell good stories are now possible in VR, along with a new language of dynamic 360 shots waiting to be created.

Action at a Distance

VR creators struggle with a fundamental challenge of the medium. How do you direct a shot when you can’t be on-set? The common solution – Wi-Fi monitoring – is notorious for being unreliable, short-range and prone to delay and interference. The Pro 2 comes paired with all-new Farsight technology, a 360° live monitoring system that offers a high-definition, low-latency video stream that’s optimized for long-distance previewing. With a transmitter and receiver, creators can effortlessly direct and control their scene from a distance of roughly 300 meters. Transmitting at 5.18Ghz, the Farsight uses smart channel switching to ensure it always cuts through the noise.

The Pro 2 is tailored for convenient stitching and editing using Insta360’s integrated Adobe Premiere Pro workflow. Every time the Pro 2 captures a video, it automatically saves a low-res proxy version in addition to the full-quality footage. All a creator needs to do when they finish a shoot is directly import their footage into Adobe Premiere Pro. The proxy files will be automatically recognized and stitched instantly to let creators preview their final project. This proxy version can be used to edit the project as usual. Then, when users are ready to export, Insta360’s algorithm will take over and stitch together exactly the footage they used in the final project, at full quality. There’s no wasted time, processing power, or effort. Creators stitch only what they use.

The Pro 2 weighs in at a handy 3.42 pounds (including a battery, memory cards and antennae), making it easy to carry on remote shoots or send up on a drone, and its hot-swap battery dock ensures that it stays powered-up out in the field. It sports four built-in mics for 360 audio, plus a pair of USB and 3.5 mm audio inputs on its top and bottom – allowing creators to add a custom audio setup or other add-ons as their shoots demand. Six MicroSD card slots, one per each camera, allow the Pro 2 to record at the maximum possible bitrate, ensuring optimal image quality and post-production flexibility. A seventh Full SD card captures stabilization data and low-res proxy files optimized for editing in Adobe Premiere Pro.

There’s a drawback to creating a beautiful, high-res VR project: You have to figure out how to deliver it to an audience — most of whom are going to be using either a smartphone or a popular headset like the Oculus Go or Samsung Gear VR, both of which max out at 4K. Using Insta360’s proprietary CrystalView technology, Pro 2 content can be quickly converted into a format that’s ready to play back – at full 8K quality – on any mainstream smartphone or headset. Insta360’s free playback apps will dynamically render these files, displaying in full quality the exact segment of a scene that a user is looking at.

Live In the Moment. But Capture It

The Insta360 supports 360 live-streaming at 4K resolution — in both 3D and monoscopic formats. The best part: Creators can save full-quality 8K footage at the same time that they broadcast in 4K, giving them the flexibility to turn their live recording into a polished edit later on.

The Insta360 Pro 2 sports a built-in GPS module, enhanced with a top-mounted antenna to improve signal strength. Creators can automatically append GPS data to their captures, allowing for easy contributions to Google Maps Street View and other precision-mapping projects.

Come and speak to us